A dream in the colour of soft pink - in the Palatinate this usually takes place during the first weeks of the year, because Spring is here earlier. This natural spectacle attracts every year “Spring-hungry” people to the avenues of almond trees, which are like a pink ribbon along the German Wine Street. The whole region is filled with merry festivities, culinary pleasures and great arrangements, during the almond blossom season: the highlight is the Gimmeldinger Almond Blossom Festival, when guests are invited to take a long walk through the sea of pink blossoms and the Mandelring turns into a street of festivities ...

Spring awakening with a pink backdrop

The dreary grey of winter is swapped for the delicate pink of the almond blossom very early on the German Wine Route. From Bockenheim an der Weinstraße to Schweigen-Rechtenbach, the landscape transforms into a sea of pink blossoms and invites you to take long walks in the spring sunshine.

The Palatinate Almond Weeks, which run from the beginning of March to mid-April, dedicate numerous events related to the almond blossom to this natural colour spectacle. The region spoils its visitors with culinary delights and exciting excursions on foot, by (e-)bike or in a vintage bus with panoramic views. Outdoor enthusiasts will love the Palatinate Almond Trail during the almond blossom season. Like a pink ribbon, the hiking trail stretches 100 kilometres from Bockenheim through the Palatinate wine landscapes to Schweigen-Rechtenbach. But it is not only the blossom that makes the region appear pink. While the almond blossom creates a colour spectacle, especially during the day, at night it is the pink glow that makes the castles, palaces, churches and many other historic buildings along the German Wine Route sparkle.

It goes without saying that there are also celebrations – the people of the Palatinate don't let anything get in the way of that! The wine festival season starts with the Almond Blossom Festival in the picturesque wine village of Neustadt-Gimmeldingen. But it is nature alone that decides exactly when that is! By the time of the festival, the 2,000 or so almond trees that can be found around Gimmeldingen alone should all be in bloom. And in Edenkoben, too, everyone eagerly awaits the Almond Mile, when the trees bloom along Villastraße and Edenkoben's winegrowers, restaurateurs and associations set up their stalls and invite visitors to taste their products.

The wine shops of the German Wine Route also radiate with a very special light on Saturdays during the Palatinate Almond Weeks. At VinoLumino, wine lovers can taste fine pink wines while exploring quaint wine cellars, which show their best side as fascinating rooms glowing in pink in the evening. At the various daytime and evening events, visitors can get to experience sensory delights, taste rosé wines and almond specialities or simply enjoy relaxed lounge music. Each wine shop presents its own specialities during VinoLumino.

Welcome to the Palatinate Almond Weeks on the German Wine Route!

Originally from China, India and North Africa, the Greeks brought this tree to Italy and then the Romans across the Alps. First mentioned in the Palatinate, these pretty flowering trees were first mentioned around 1100. In 1464, the cultivation of almond trees was mandated by Elector Friedrich of the Palatinate in order to increase the urban revenues of the town of Neustadt. Because of its pretty flowers, Reichsrat von Buhl planted the first avenue of almond trees in Gimmeldingen, in front of the Castle Hildebrandseck in 1911. A planned deforestation of these trees at the end of the 60’s caused a powerful uproar. Engaged citizens of Gimmeldingen however knew how to prevent this, and since then have planted more avenues. The first Gimmeldinger almond blossom festival took place on April 15th, 1934 under the idea of making the local wines more well-known as well as attracting tourists. 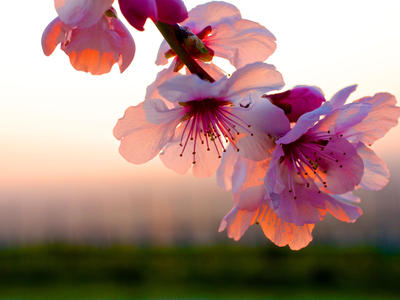 available by phone from 9 am