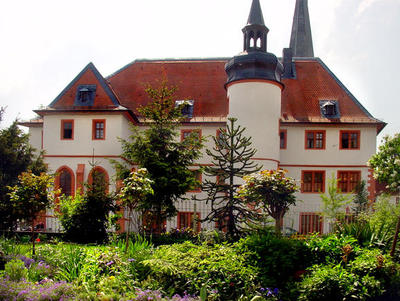 Or " Casi " as it is called by the people of Neustadt, is a veritable gem of architecture combining elements of both the Gothic and Renaissance eras. Count Palatine Johann Casimir founded here a Calvinistic theological college, in 1578, as an alternative venue for the then Lutheran University of Heidelberg.

Regrettably, this Collegium Casimiri ( Casimirianum ) was closed after only 5 years but nevertheless achieved a significant place in the history of Calvinism since all the professors who supported Calvin's doctrine under the rule of Louis VI and refused to convert to Lutheranism emigrated from Heidelberg to Neustadt in order to teach here. For this reason the Casimirianum was for a limited time, the most important Calvinist university in Europe .

Above the portal is a carving of an old saying, - DEO ET MUVSIS SACRVM – thus coining the spirit of humanism of those times.

The oldest grammar school of Neustadt, the Kurfürst-Ruprecht-Gymnasium was also founded on the traditions of Casimirianums.